Living in multiple time zones: from hitchhiking across America to living vicariously When I was in my early 20s, I spent a summer hitchhiking across America. I was with a good friend, Ingrid, who was ready for an adventure, and off we went with our forty-pound backpacks, starting in New York State and landing a few months later in California. Each driver who picked us up presented another set of wonders, as we listened with fascination to stories about their lives, and shared stories from our journey. One driver who picked us up in Kansas told us all about her research on Sudden Infant Death Syndrome, which required that she travel across three states to visit research sites. A young person anxious to find a career, I was blown away with how cool that sounded, but we were nearly blown away when her tire exploded. Luckily – and luck was what you needed when you were hitchhiking – we were just pulling into a gas station. Unluckily, it was July 4th and the mechanics couldn’t fix the tire until the next day. We slept in the car that night inside a stuffy garage, which was offered to us as a safe haven.

When we were moving up the coast of California, a driver picked us up in a mobile home he was hired to transport. When we hopped in, we discovered two other hitchhikers, and soon found that both of them had just been released from a local prison. They had committed minor economic crimes, or so they said. Another ex-convict joined us along the way, and we all slept that night in the van. But something obviously went awry during the night, because we woke up the next morning to our driver speeding down the road and screaming at high volume to one of the women, “I’ve got a bone to pick with you!”.

Ingrid and I never found out what that bone was, but we mousily asked to be let off at the next rest stop because we said that was our destination. As he drove away, we hid behind a bush, waiting for him to leave, and then went back out on the road with our thumbs ready to find our next ride. He knew we were lying and drove around in a circle, finding us back out on the highway. We did not get back into his mobile home, and survived to tell the tale.

Hitchhiking in America was pretty standard fare for a sub-culture of counter-cultural Americans in the 70s. And two young women going on the road “alone” wasn’t considered outrageous, because we were caught in the tide of a rising second wave of the women’s movement where females could do (almost) anything. While we knew we were dancing with danger, we had youth on our side, and the sense that we could handle whatever we encountered. Later I took my travelling skills to a nearly year-long trip in Europe, and continued to welcome adventure along the way. Sometimes I think my sociological imagination was birthed on these trips.

Now I am a mother whose young adult daughter is travelling – not with her thumb – but with a bike and a girlfriend – through Europe. Unlike my travels which happened sans parental approval or even knowledge, I am in the know about this trip, thanks to a very different kind of parental-child relationship in this 21st century, and a smart phone that supports that. I am caught between experiencing vicarious thrills and experiencing terror, because I know that sometimes things can go very right and sometimes they can go very wrong.

They have been biking for over a month, and still, every morning when I wake up and look at the clock, I add six hours, and imagine what my daughter and her friend are up to. Are they on a beautiful, winding country road, biking next to sheep grazing on the side of the road? Or are they on a jagged, narrow road where cars are, at best, only nearly missing them? Have they encountered the kindness of strangers? Or have they experienced “near misses”?

Both of my trips were much less structured than my daughter’s. If I ever feared for my life during my hitchhiking trip across the U.S, it vanished the second we moved on to the next ride. Even when one of our drivers had a bayonette on his dashboard, I felt invincible and maintained my faith in the goodness of people. With my trip to Europe, which I had spent one whole year saving up for, I was part of a sub-culture of young travelers like myself, populating hostels, walking the streets with our oversized backpacks, and finding bargain meals to stretch out funds for as long as possible. My daughter and her friend are more like speedy turtles, carrying minimal clothing, a tent and other supplies on their bodies and bikes, as they follow roads through small villages and towns, and bike along the side of lakes and rivers. 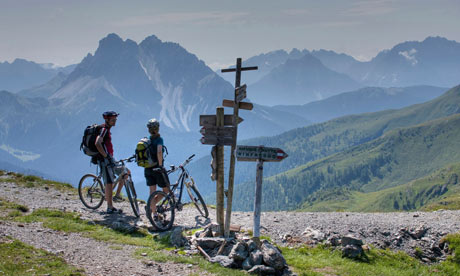 When they get a flat on the side of the road, they are only more fully a part of the scenery, and even a conversation piece for the locals. They are couch-surfing, taking advantage of a miraculous network of people who offer their homes to strangers, supported by an on-line forum where people post their availability and travelers contact them. Former couch-surfers can review their experience so that prospective ones can evaluate their options. Couch surfers even evaluate the travelers too. My daughter told me that after they left their first couch surf home, their host posted that she and her friend were “like sisters and made me smile the whole time of their visit”. For the most part, life for them has been pretty darn good, even great.

Unlike with my trip, where I didn’t talk to my parents at all, my daughter and I talk every few days, thanks to Skype, and when there’s a problem, we talk more than once a day. Forty years ago, I didn’t want to talk to my parents, and maybe because it wasn’t an option, I didn’t miss it one iota. Now I can’t imagine being on my parents’ end of things, not knowing where I was or what I was doing for many months at a time. I am relieved that I can check in with my daughter, and that she has a blog page that narrates her travels with glorious pictures! I doubt that I did more than send my parents a few postcards. At the same time, just because I can stay in touch, the challenge is to not hover, because the reality is that if there is a problem, there is very little I can do from thousands of miles away, other than listen and maybe help them solve it themselves.

As our children grow up, I “get” that we need to let go, to allow them to spread their wings and learn from experiences, both good and bad. But it’s a scary world, and sometimes I’m just frightened. I’m not naïve about the potential dangers out there, but at the same time, for two young women to explore the world – especially from the vantage point of a bicycle – it is just incredible. Some friends have told me how cool I am to “let her go” on the trip; others tell me they would never have approved a trip like this. But I did. (Did I really have a choice?) And in good part, I did because my parents didn’t stop me from exploring, even though they had no idea what they should have protected me from.

I imagine that for the next few weeks – the amount of time remaining in this trip – I will calculate the time zone differences and imagine where they are in their journey. I will control the amount of contact I initiate, but will steadily follow their blog and Facebook posts. I know that the life lessons gleaned from this challenge will be more potent without mommy. And I will continue to be caught in this odd place between vicarious pleasure and terror.
Posted by Mindy Fried Arbor Consulting Partners at 3:55 AM 11 comments: