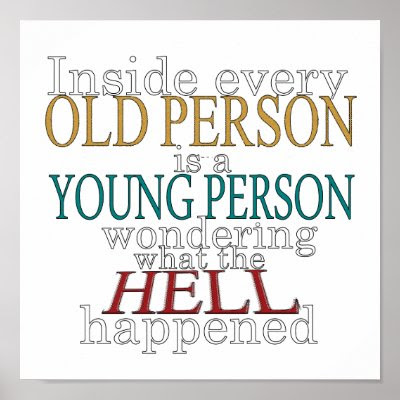 When I first visited my father's assisted living facility, some guy shuffled up to me and asked, "Am I going to dinner or lunch?" I managed to reply as if it were the most normal question in the world, but felt like I had landed in the Twilight Zone. Over the past year, I've grown accustomed to hearing just about anything that anyone says. For example, over dinner this guy I really like, Harry, whispers to me in a conspiratorial tone, "How old is your father?" I tell him, for the umpteenth billion time, that he is 97-years-old. And as if this is the first time he's heard this news, he responds with shock, telling me that my father looks so young! Harry tells me he's 90 and then turns to his girlfriend, Millie, who is only 80, and says, "Isn't that right?" She replies patiently, "Yes."


Lately, I've been spending a lot of weekends with my father, as his health is rapidly declining. Despite the fact that he's officially in home hospice, he is enjoying lunch and dinner visits with friends, and he goes to exercise class every day at the facility. On Sunday, he was too tired to go and as he was contemplating what to do, admitted that he felt guilty for not going. He's not even Catholic!
I started looking forward to joining him at his morning weight exercise class, where a young and very perky teacher gets things rolling with balloon volleyball, a "game" I associate with young children. It's pretty straightforward. She stands in the middle of the circle of residents who are all seated in their chairs or wheelchairs, and she flips the ball around the room, making sure everyone has a turn. Some are very cautious with the balloon; others give it a big whack and laugh out loud.

I'm amazed at how long folks enjoy playing this game. Even though the class is called weight exercise, this weightless balloon game constitutes about three quarters of the class. I get into it, mixing up my "moves" with actual hard punches and an occasional soccer head hit, which is entertaining for this crowd. Later in the dining hall, I see some of my volleyball team and we have a special connection.
For a moment, I imagine what it would be like if I actually lived here. And then I realize that by the time I had to live there, I probably would have some fairly significant things missing, like my ability to move freely and maybe even my mind.
Of course, all of this fun and games is punctuated by an undercurrent of failing health, as residents notice who is not showing up at bingo or as someone is rushed out of the building on a stretcher. Harry often asks me how my father is doing, calling him "Mack" even though that's not his name. His girlfriend reminds him, with a touch of annoyance sprinkled with humor. He says to me hopefully, "Mack looks really good, just the same as when he first moved in, doesn't he?" The fact is that "Mack" isn't doing too well at all, but I don't have the heart to tell Harry.
I feel grateful that we found a place where the staff are kind and mostly competent, and the residents aren't all out-of-it. My father first moved in after a serious fall and it was evident that he could no longer live independently. He was willing to move, but angry just the same, and at times, said he had to get out of there. He felt alienated. These weren't "his" people. He assumed they weren't into what he was into, like theater, literature and politics. He certainly wasn't a bingo kind of guy, either, which is one of the big pastimes in that place. But over the year, he has succumbed to "gambling", as he calls it, and takes pleasure in being in the company of others. Happy hours - which include cocktails like Margaritas served in little paper cups- seem to tickle his fancy.

It's harder for him to follow conversations, and there's no point in bringing him to the theater now, because he is now legally blind, and anyway, he'd have trouble following the action and would end up sleeping through the whole thing. Not to mention that getting there and back would be very hard.
How do we want to live the "end-stage" of our lives? The research says that a critical factor that keeps people going - no surprise - is engagement in meaningful activities. Another important thing that keeps us alive is giving to others. The bottom line is that we all need to feel that our lives have meaning, that were contributing to society, more broadly, or to our friends and loved ones at a personal level. We all want a life well-lived.
But how do we maintain engagement? Perhaps we need to ask:  What are we doing now in our lives that will sustain our sense of engagement? What kind of networks will we still have if and when we live long? How do we maintain a network of younger friends? Because chances are, all or most of our contemporaries will be gone if we live very long. And what about housing? My father lived on his own until he was in his mid-90s, resisting our efforts to consider safer options. We could never imagine him in an institutional setting, but we're lucky that he can afford a decent assisted living facility and extra care, as needed. But what about the thousands of elders who don't have the resources to live this end-stage of their lives surrounded, as he is, with dignity and love?
I leave my weekends with my father feeling exhausted but glad I was there with him. And I can't help but wonder whether I'll live to his age or older, and if I do, what kind of options will be available for the old woman I become.