My mother and Mary Cassatt 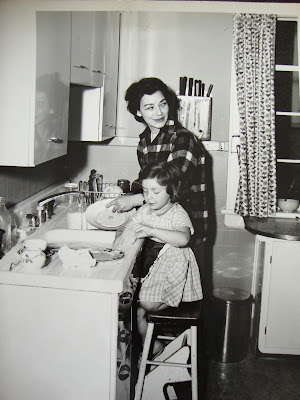 This is a picture of me and my mother. You'd never know from looking at the expression on her face that she hated being a "homemaker". In fact, she looked pretty happy hanging out with me, even if we were washing dishes! In her younger years, prior to the birth of her two daughters, she wrote sultry torch songs and had her own radio show. Later, she studied painting and then continued to paint portraits until her final days. When I was a teenager, she exhibited her paintings every year in an outdoor art festival, near a studio she rented in what was considered the bohemian part of Buffalo, New York, my home town. Despite being an adolescent, this was the one and only weekend - every year - that I thought my mother was really cool. 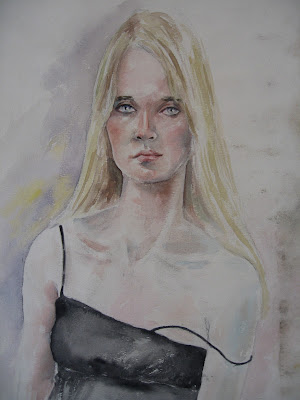 Here is one of her watercolors that I still really love. Middle-class women of my mother's generation - caught between the suffragettes of the early twentieth century and the second wave of the women's movement of the 1970s - did not have an organized "sisterhood" of women supporting them to step out of the kitchen. As an artist, my mother was passionate about her work, but it was never considered a career, nor did it generate much income, even though she taught painting and sold commissioned portraits. In fact, in her era of young motherhood - the 40s and 50s - single middle-class women who worked for pay were expected to leave their jobs once they were married. As we know now, the independence of women is often tied to their earning capacity, and not being considered a professional was hard on her. This phenomenon was eventually coined the "problem without a name" by Betty Friedan.

My mother's favorite artist, Mary Cassatt, is quoted as saying:

"There's only one thing in life for a woman; it's to be a mother...A woman artist must be...capable of making primary sacrifices."


How ironic, given that Cassatt never married, nor did she have children; and for many years she painted portraits of mothers and children!

Reflecting the schizophrenic existence of a strong-willed woman of that era, Cassatt also said,

"I am independent!  I can live alone and I love to work!"

Even though her family objected to her becoming a professional artist, Cassatt began studying painting at the Pennsylvania Academy of the Fine Arts in Philadelphia - where my mother also studied art for one year. I never spoke to my mother about why she left, but Cassatt also left after one year, complaining that "there was no teaching" at the Academy. Unlike male students, females couldn't use live models. This is likely just one of the inequities she encountered there. When she left, Cassatt moved to Paris. When my mother left, she moved back to Buffalo, New York...

My mother's life was one of sacrifices, like so many women of her generation. The arts were a place for talented and creative women for whom other professional careers were closed. Maybe it was a vestige of the Victorian era when it was considered proper for upper-class girls and women to "dabble" in the arts. To be considered a serious artist was another thing though.  And my mother always struggled to be considered a professional. It irked her when the realists or even the abstract expressionists - always male - won the competitions she entered. She intuitively understood that there was gender bias, but the proof was invisible. To be an artist means expressing oneself - putting one's vision into the universe to challenge and inspire or simply to portray beauty. In an era where women's voices were not heard, being a woman artist was revolutionary. 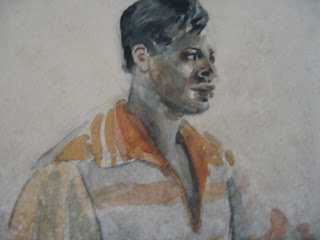 In 1971, art historian Linda Nochlin published an article called "Why are there no great women artists?", in which she identified a number of institutional barriers that explain why women artists had historically been on the periphery and not considered real artists. For example, in the 19th century, women couldn't join the the painters guild; they were barred from official art schools; and they were not allowed to attend nude drawing classes.
In a film about women artists called "Who does she think she is? - produced by Pamela Tanner Boll (who also produced Born into Brothels) - artists reflect on the challenges they face balancing their work and family demands.

They talk about how they're not taken seriously precisely because they're women. In fact, while 80% of students in visual arts schools are women, "in the real world," 70-80% of artists whose works are shown in galleries and museums are male.


In an article in the New York Times, Marci Alboher says these statistics "sound alarmingly like the numbers released by organizations that track the presence of women in the highest echelons of professions like law, journalism, engineering or finance." The women artists in the film also argue that they are dissuaded from focusing their art on the subject of mothers and children, because it is not considered "real" material. Both artist and subject are devalued...


Outside the art world, says Alboher, people rarely discuss the challenges faced by women artists "moving up the ranks." This has a lot to do with the fact that women are still considered primary caregivers in this society. Despite the large percentage of mothers in the labor force, we are still defined primarily by our capacity to bear children. Most workplaces do not accommodate the need for work-life balance for their employees, be they women or men.


As a teenager, I was often frustrated by my mother's lack of confidence in her work. I wanted her to be a strong role model in many ways, someone who followed her passion and knew she had talent as an artist. But now I have an increased understanding of the effects of working in isolation, in a society that didn't value the work of women artists, and in the microcosm of that society, in a family that expected her to have dinner on the table every night. (No wonder she hated to cook!)


I love the comment by Georgia O'Keefe who once said,


"I'll paint it big and they will be surprised into taking the time to look at it. I will make even busy New Yorkers take time to see what I see of flowers."

It takes guts to think that your painting will stop New Yorkers in their tracks! But while guts are good, women's voices need to be valued; the balance of caregiving must be shared; workplaces need to accommodate the work-life balance needs of parents; and social policy must broaden to include paid parental leave and universal, free early care and education.


The incredible Mexican painter, Frida Kahlo, once said, "Painting completed my life."  I think my mother felt the same way, even though she never achieved traditional "success" as a painter... 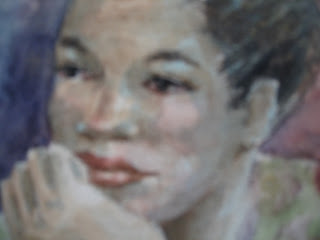 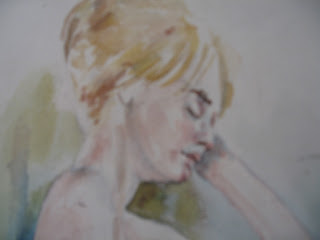 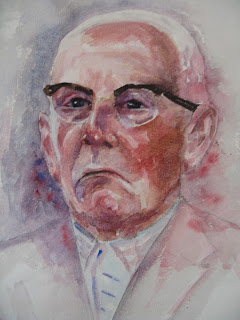