Around 10 years ago, when I was going through menopause, I switched to a new OB/GYN who nearly convinced me to go on Hormone Replacement Therapy (HRT). I had told her that my mother struggled with hot flashes and depression during her “change of life”, as they say, and I was worried about what it would be like for me. As a preventive measure, she prescribed HRT. Jump two frames forward and there I was, standing in line at the local pharmacy waiting to pick up my meds, but feeling very ambivalent. I’ve always been drug-adverse, and I thought, ‘why am I considering taking these meds unless it’s absolutely necessary?’ I was trying to stave off a problem that didn’t actually exist! 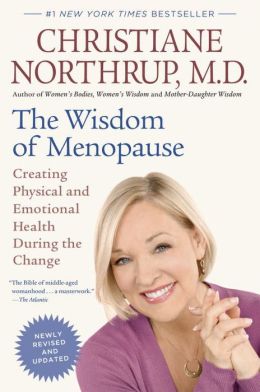 Serendipitously, I started to chat with the woman in line next to me, a friend of a friend, who suggested that if I had questions about HRT, I should take a look at Dr. Christine Northrup’s book, “The Wisdom of Menopause”. Even though I walked out of that store with a filled prescription, I never cracked the bottle. Northrup says, “I’ll take my chances with the hormones that mother nature has taken at least 3 million years to come up with”, arguing that women with healthy ovaries and adrenals may not need (HRT). Even for the one-third of women who have had their ovaries removed and may benefit “from a little estrogen or a little progesterone or possibly a little testosterone”, Northrup says that “in no case should these be the conventional hormones that are synthetic. This is important for people to know: you cannot patent a naturally occurring hormone”. (Northrup’s advice about nutritional supplements below.*)

It turns out that there are some serious reasons to avoid HRT. Medical sociologist, Gayle Sulik, writes:  “Clearly, there is a relationship between the use of synthetic hormone therapies and breast cancer even if the mechanisms are not fully understood. In 2002, when the findings from the Women’s Health Initiative estrogen-plus-progestin study came out, about 38 percent of postmenopausal women in the U.S. were using some type of hormone therapy drug. When the WHI findings hit the news, sales plummeted and breast cancer incidence rates also dropped”.

An article published in the New England Journal of Medicine also linked a sharp decline (6.7 percent) in breast cancer incidence in 2003 with the release of the first Women’s Health Initiative report “and the ensuing drop in the use of hormone-replacement therapy among postmenopausal women in the United States.'”
I later read somewhere that around 40% of women who get their HRT prescriptions filled never take the stuff, and that info validated my choice. The link between HRT and breast and other cancers was too real to me. My mother had had breast cancer, and it seemed like taking these drugs was like playing with fire. Instead I devoured literature on alternative ways to deal with menopause symptoms, drank my soy milk and copped a “bring it on” attitude.

As if there weren’t enough reasons to question the use of Hormone Replacement Therapy, I just discovered another. Call me naïve or sheltered, but it never occurred to me that Premarin – an HRT taken by a number of my friends – was named for what it actually is: Pregnant Mare’s Urine. In other words, the drug of choice for so many menopausal women comes from horses that are “farmed” for this exact purpose. Northrup says, “People will tell you that Premarin is natural–yeah, it’s natural if you are a horse!” 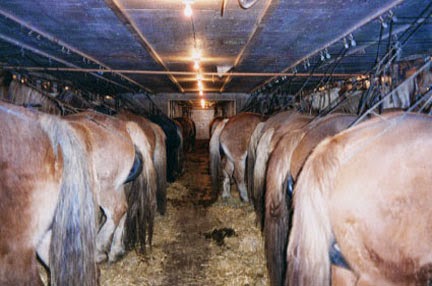 According to an April 5th Boston Globe article by Nestor Ramos,, these horses are kept “inside long barns in the Canadian provinces of Manitoba and Saskatchewan”, lined up in rows of small stalls, “tubes snaking up from under them into vessels nearby”. Geez! Ramos, comments, “It sounds like science fiction — some equine version of “The Matrix,” in which a superior species saps humans for their nutrients — but it’s true: The urine is precious”.

The article is a human interest piece focusing on two women – one, age 70; the other, in her late 20s – who share a love of horses. It turns out that while selling Premarin is a profitable industry, “keeping hundreds of horses pregnant every year” in order to gather their urine has a downside. The mares have babies, and selling the foals for meat is also apparently a profitable business. The elder woman has spent years going back and forth to Manitoba to rescue some of these foals from the “slaughterhouse floor”, but her energy to make this trip has waned, so having a protégé who shares her passion has made it possible for her to carry out this mission, and in a way, build in the potential for someone to carry on when she no longer can make the journey. 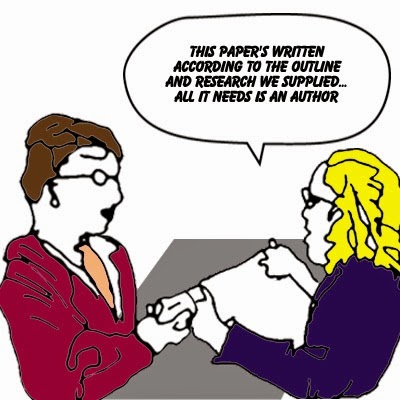 I love the story of these two women: one in which the passion and leadership of the “elder” inspires the younger, and the vibrancy of the younger who makes this difficult journey possible. But what if there wasn’t such a lucrative industry around harvesting pregnant mare urine in the first place to supposedly rescue aging women from a natural change in their reproductive cycles? Northrup comments, “The hormones that naturally occur in the human female body have been altered so that the drug companies can justify the R&D programs to patent a hormone and therefore make their money. It’s frightening!”

Check out this Huffington Post piece by investigative reporter Martha Rosenberg, called “When the publication plan is ready, the research will appear”, in which she describes how the marketing arm of a drug company published articles denying the link between HRT and cancer. “Though the marketing firm’s “science” is egregiously flawed — HT has strong links to breast cancer, breast cancer, heart disease and Alzheimer’s — the papers have not been retracted.”

The cultural narrative for menopause, very much aided and abetted by the pharmaceutical industry – is that it’s a medical crisis to be tackled. Women’s natural reproductive functions have long been viewed as indicative of “otherness”, weakness and incapacity, from menstruation to menopause. While many women surely benefit from a medical approach to easing symptoms of menopause, we must question who and what the medicalization of menopause serves, and recognize that menopause isn’t a wasting away, a time in which we go bonkers and lose our minds and bodies. It is just another passage in a series of chapters in women’s lives.


* Northrup does recommend the use of nutritional supports such as omega 3 fats and B vitamins, “to help clear estrogen dominance from your system”.  Because when you stop ovulating and you don’t have progesterone to balance the estrogen, “that can create a state of anxiety, jitters, and headaches”. Her advice? Eating soy or ground up flax seed “helps a great deal to give you plant hormone support while your body is making the transition”.