WE ARE (ALMOST) ALL IMMIGRANTS... 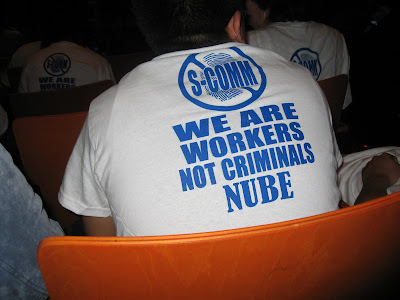 Last night I went to a rally and public hearing in Chelsea, Massachusetts about the “Secure Communities” program. For those of you who are unfamiliar with this program – as I was up until recently – it would increase federal authorities' access to information about immigrants who are suspected of committing a crime.

Currently, police now have the technology to take the fingerprints of crime suspects and share them digitally with other state officials around the country, to see if they surface other crimes. Under “Secure Communities", the U.S. Bureau of Immigration and Customs Enforcement (ICE) would have access to the technology of state officials, including suspects’ fingerprints and background information. 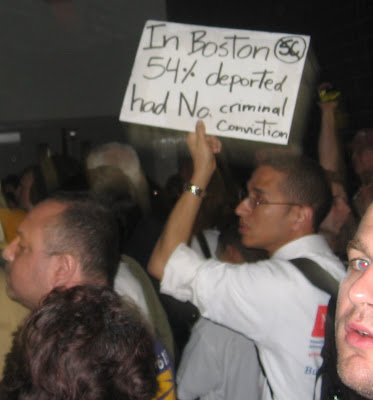 The program was supposedly started by ICE to identify serious criminals, but it turns out that the majority of people identified by Secure Communities have minor or no criminal convictions. In fact. in Boston, where the program was piloted, over 50% of the immigrants who were arrested and deported were in this category! Nonetheless, the federal government plans to implement the program – to be administered through state agencies – by 2013.

Given this federal mandate, Massachusetts Governor Deval Patrick has stated that he will comply with the program. Last year, a number of jurisdictions around the country - including San Francisco and Santa Clara - requested to opt-out of the program, but they were given mixed responses from federal officials about how the opt-out process works. First, the administration said that opting-out was allowable, and then they reversed their position, saying that the program was not voluntary. Finally, in an official response, ICE said that “Secure Communities is not voluntary and never has been. Unfortunately, this was not communicated as clearly as it should have been to state and local jurisdictions by ICE when the program began.”  What?!
Now, Representative Zoe Lofgren, the top Democrat on the House Immigration Committee, is calling oversight officials from the Department of Homeland Security to look into these conflicting statements. http://immigrationimpact.com/2011/04/25/congresswoman-zoe-lofgren-demands-investigation-into-ice%E2%80%99s-secure-communities-program/
It turns out that Governor Patrick only scheduled these hearings following pressure by community-based organizations that focus on immigrant rights. In response to the "Secure Communities" program, a non-profit called Centro Presente launched a "Just Communities" campaign, in collaboration with the ACLU of Massachusetts and the American Friends Service Committee. Their campaign included high visibility events like rallies in front of the State House, and hand delivery of 1,000 protest postcards to the Governor.

Last night, at the Chelsea hearing, opposition to the program came through loud and clear. Over 200 people jammed into the auditorium of the local high school, mostly to voice their opposition to the “Secure Communities” program. Before the event, there was concern that the Tea Party would show up and be disruptive, as they had been at another hearing in Waltham, Massachusetts. And sure enough, a small but vocal group was there. I happened to sit next to two Tea Partiers. Given the “otherness” with which these folks are painted – and the outrageous behavior of many of their leaders – I felt a certain trepidation and immense curiosity about who they were and what they were thinking throughout the evening. 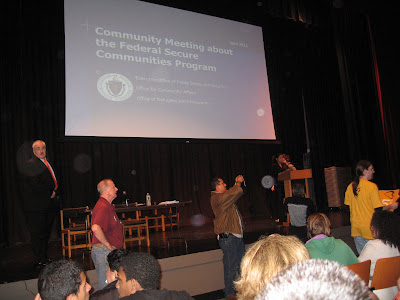 The hearing began with a public official from the state’s Public Safety office, explaining how the system functioned to track criminals. His voice was monotonous, designed to make the most patient listener edgy. Backed by an uninspired Power Point presentation, he droned on and on, and the crowd got restless. His main points, which he made over and over again, were two-fold. First of all, he said that the “Secure Communities” program only involved procedural changes that would allow state officials to share information about suspects with federal immigration officials. Skirting any potential policy implications, the official described the program as if we, the audience, were simple people who just might not understand the complexities of government. His second message was that this program was going to be implemented, regardless of public concerns, and that the role of the state was to figure out how to best accomplish this goal.

So what was the point of these hearings? Why bother asking us what we think of the program? There was something odd about this introduction that said, ‘basically, this is going to happen anyway,’ when clearly, the door for dialogue and debate is still open…
I wondered if the purpose of this state official’s droning speech was to take up time, so we’d have less time for public testimony. But sure enough, he finally finished and the audience was invited to line up along the side rows of the auditorium to take turns commenting and asking questions. 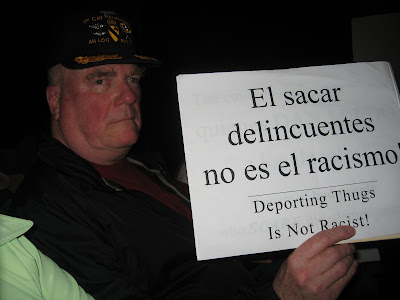 My Tea Party friends sitting next to me were busy. The woman adjacent to me was videotaping the entire event, and her partner – who carried a series of signs in support of the program – was tallying how many people spoke out for the program and how many spoke out against. Given my curiosity about them, I tried to make small connections. I asked the woman if she could lend me her pen and we smiled at one another. And when people were looking for seats, we both raised our hands and pointed to the seats in our row. I donned my sociological eye and thought of this as a “research-able moment”. 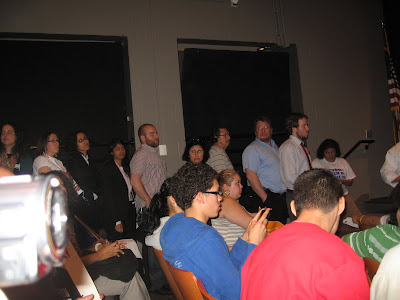 One by one, Latino immigrants shared heart-felt stories of working hard to contribute to this society and their sense of betrayal with this program. The audience cheered in support. Many shared stories of being racially profiled, or stories of friends who were deported unfairly to countries where they were not safe. Again, the audience cheered. An elderly Chinese immigrant spoke with the help of a translator, saying that we are all immigrants to this country, as the crowd stood up and burst into applause. And when he walked away from the microphone, audience members reached out to shake his hand in solidarity. Many white audience members spoke about being second or third generation immigrants, bridging the gaps between first generation immigrants and nearly everyone else in this nation. Again, the audience cheered. A lawyer from the Center for Constitutional Rights told us that there were a couple of lawsuits challenging the legality of the program, and her comments reassured the audience that there was, in fact, recourse. And several others spoke about the danger of "Secure Communities" for women victims of domestic violence as it might deter them from reporting abuse for fear of being deported if they are undocumented.

Interspersed between the 80 or more speakers who opposed “Secure Communities” were roughly 10 Tea Party speakers who supported the program. With some, it was evident that they were Tea Partiers from the moment they opened their mouths, because they started with inflammatory comments like “immigrants are criminals.” But the most controversial Tea Partier who spoke was a Latino man who loudly declared his support for the program because he said it would get rid of immigrants who were criminals. When the crowd began to “boo” him, he shouted defiantly, “Soy Dominicano y soy un Team Partier!” (I am Dominican and a Tea Partier.). And as he loped back to his seat, he nodded to his fellow (white) Tea Partiers, punching his fist in the air. 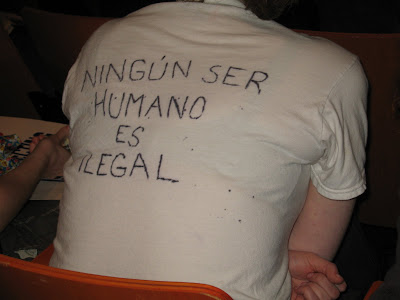 At the end of the hearing, as we were all putting on our coats and preparing to leave, I turned to my Tea Party friend and asked her what she planned to do with the video she had been shooting. She kindly responded that she would put it up on YouTube for those who weren’t able to be there. I asked if she was a member of the Tea Party, to which she answered, yes, and then replied by asking if I was in the Tea Party too! That surprised me, and made me realize that she wasn’t paying any attention to my hoots of support for those who opposed the program! I wondered what she was thinking about what she had just heard. After all, we had both spent the past hour listening to the same speakers and many of their compelling stories. So I asked her if any of these stories had moved her to think differently. She looked at me with a pained expression, and said, yes, particularly the women who were victims of domestic violence. ‘But what can we do?,’ she implored. ‘We need to deal with the criminals! We need to change the police chiefs!', she exclaimed. And with that, we walked in separate directions.
What will come of these hearings? Will the Governor take this outcry seriously, and consider opting out of the program? I certainly hope so, but I now realize that the pressure for him to do so comes from a number of directions, including the legal strategies being pursued by advocacy organizations, legal strategies in motion because of a powerful Congresswoman, AND the people in that high school auditorium. I left the meeting feeling satisfied and proud of the amazing people in that room who had the courage to speak out and express their outrage at a policy that doesn’t produce the outcomes it’s intended to produce, and in fact, creates more insecurity in our communities. It was this sense of community - created in that room - that gives me a sense of security.

Posted by Mindy Fried Arbor Consulting Partners at 10:24 AM